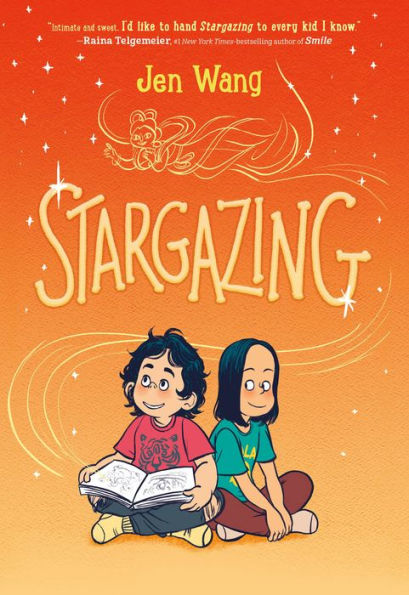 “We can’t change the past. But we can learn from the way we hurt the ones we love, and try to do better,” Baba. –Stargazing

Moon is everything Christine isn’t. She’s confident, impulsive, artistic . . . and though they both grew up in the same Chinese-American suburb, Moon is somehow unlike anyone Christine has ever known.

But after Moon moves in next door, these unlikely friends are soon best friends, sharing their favorite music videos and painting their toenails when Christine’s strict parents aren’t around. Moon even tells Christine her deepest secret: that she has visions, sometimes, of celestial beings who speak to her from the stars. They reassure her that Earth isn’t where she really belongs.

Moon’s visions have an all-too-earthly root, however, and soon Christine’s best friend is in the hospital, fighting for her life. Can Christine be the friend Moon needs, now, when the sky is falling?

Readers will relate to Christine, who is at first reluctant to be Moon’s friend. As she becomes friends with Moon, Christine learns to step out of her comfort zone and try new things, including wearing nail polish. When Christine’s father sees the nail polish, he tells her, “things like clothes, makeup, and nail polish are just things to keep smart girls like you from succeeding.” While Christine’s father encourages her to be friends with Moon, he reminds her, “just because Moon does something doesn’t mean it’s right for you, too, okay. You’re different girls with different paths. Remember who you are.”

In order to make her parents happy, Christine tries to be perfect, but she secretly wishes she could be more outgoing like Moon. At one point, Christine worries that Moon will make new friends and no longer like her. Christine intentionally embarrasses Moon, and when Moon gets sick, Christine avoids her. Despite this, Christine and Moon eventually talk about their conflict and are able to repair their friendship.

The graphic novel’s panels use pastel colors and expressive faces to bring the girls’ world to life. Throughout the novel, the pictures in Moon’s sketchbook are featured, which allow the reader a peek into Moon’s imagination. Wang’s illustrations expertly convey the characters’ emotions through facial expressions as well as actions. Much of the story is told through illustrations without words. Despite this, the reader can easily understand the story’s plot. While some pages do not have words, other pages have up to eight simple sentences that use easy vocabulary and is perfect for even the most reluctant reader.

Anyone who feels ordinary will understand both Moon’s and Christine’s struggles with loneliness and the need to feel special. The two girls’ friendship is imperfect, yet endearing. In the afterword, Wang explains that one reason she wrote Stargazing was to show “the diversity of experiences even within a very specific community. As our society continues to diversify (as I would hope), I imagine there will be many more Moons and Christines out there wondering which parts of them are ‘not Asian,’ and which parts are just uniquely and wonderfully them.”

“We can’t change the past. But we can learn from the way we hurt the ones we love, and try to do better,” Baba. –Stargazing