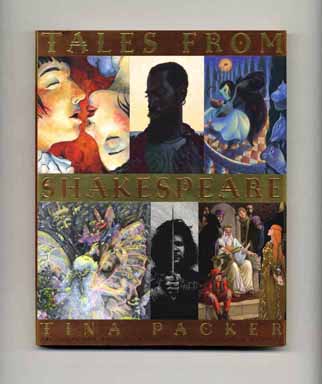 Tales from Shakespeare takes a trip through 10 of Shakespeare’s plays covering the gamut of plots. From lighter stories such as A Midsummer Night’s Dream to stormier plots like Macbeth, Packer does a thorough job portraying the range that Shakespeare had with his pen.

Shakespeare is often cautioned when given to readers as it can be hard to get through, but this book helps to break down that barrier. Packer tells Shakespeare’s stories in her own words while seamlessly weaving excerpts into the process. This method of storytelling removes the intimidation factor that Shakespeare can sometimes have with new readers without forfeiting the ingenious wordsmithing that the Bard is known for.

Perhaps as enticing as the beautiful stories are the incredible artwork that sits between the pages. Packer recruits a different illustrator for each of the plays, and each has vastly different styles. The variety of artwork is all too fitting for stories with vastly different plots. The illustrations serve as milestones when flipping through the book urging one to continue reading to reach the next scene. With highly detailed illustrations in high resolution, one finds themselves looking at the portrayed landscapes and characters and feeling a sense of escape. Illustrations appear every 10-15 pages, often at the beginning of a new story. Having such detailed imagery only seems fitting for literature that was intended to have a visual aspect as well. Originally, one would be listening to these stories while watching it unfold in the spotlight. This book simulates that feeling with the interplay of visual art and literature. Tales from Shakespeare feeds one’s fictitious hunger and lets one’s imagination roam.

It is a known fact that some of the topics covered in Shakespeare’s plays could be harsh for a younger audience. The original stories have sexual innuendos, violence, and strong language, and Tales of Shakespeare does not remove those topics. Packer does not alter the stories, but she does not dwell on graphic details that are portrayed in a matter-of-fact way. If someone dies, she mentions it, but she does not use the moment to leverage a reaction from the reader. The focus of this book is to welcome as many readers into the “Shakespearean fold” as possible by introducing his command of the human experience. The theme that ties these stories together is the timelessness of these plays, and how they have the power to cause one’s eyes to well up hundreds of years later.

Tales of Shakespeare is the perfect introduction to Elizabethan England, 17th-century English dialect, and Shakespeare’s stories. Shakespeare’s stories are timeless, and they have spoken to people throughout the ages. This book would serve as an excellent resource as an introduction to how plays are read and how they are formatted. The book includes the plays A Midsummer Night’s Dream, Hamlet, Much Ado About Nothing, Macbeth, The Tempest, Othello, As You Like It, Romeo and Juliet, Twelfth Night, and King Lear. Tales of Shakespeare covers some of Shakespeare’s greatest works and the prowess of the Bard is made accessible through this book.