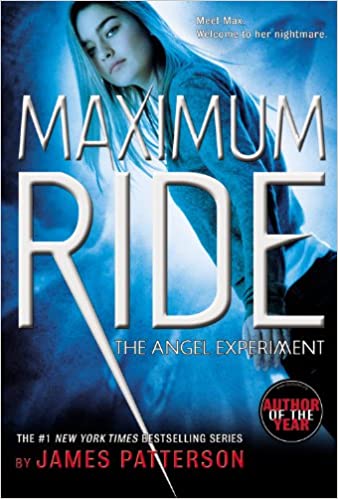 Other books by James Patterson

“Sometimes it felt as if we would never be free, be safe. Never, ever, as long as we lived. Which might not be that much longer, anyway,” Max. –Maximum Ride: The Angel Experiment

Meet the flock. Max, Fang, Iggy, Nudge, the Gasman, and Angel are six kids who grew up in cages as the School’s most successful test tube experiments. The School is a science lab located in Death Valley, California where the scientists—or whitecoats—experiment on children’s genes. Four years prior, Jeb Batchelder, one of the scientists and the group’s father figure, escaped with the kids and took them to a cabin in Colorado. Two years afterwards, he disappeared, leaving the kids without an adult to care for them.

These six kids aren’t your average American children. The whitecoats had the flock’s genes spliced with avian DNA, giving them the ability to fly via physical wings attached to their backs, along with some special abilities. Max, self-named Maximum Ride, is the oldest and leader of the flock at 14 years old. She serves as a mother figure even though she is still a kid herself. Fang is four months younger than Max, a sort of second-in-command, and is usually very quiet, “like a dark shadow come to life.” Iggy is younger than Max and blind due to the scientist’s unsuccessful attempt to surgically enhance his night vision. Nudge is an 11-year-old and, according to Max, “is a great kid, but that motormouth of hers could have turned Mother Teresa into an ax murderer.” The Gasman, or Gazzy, is eight years old, named after his ability to produce very rancid farts. He can also mimic any voice or sound. Lastly, Angel is Gazzy’s intelligent six-year-old sister who has the ability to read minds.

Suddenly, the School’s Erasers capture Angel and plan to return the rest of the flock to the School. Erasers are half-human, half-wolf mutants who are usually armed and bloodthirsty. At first, they look like male models, but they can transform into hairy beings with claws and fangs. Leading the Erasers’ hunt is Ari. The last time Max saw Ari, he was a three-year-old boy. Now he’s a grown Eraser. Terrified about going back, the flock must rescue Angel from the School without getting. However, along the way they discover new things about themselves, their pasts, and the big plans the School has in store for them.

James Patterson tells a fascinating story filled with science, action, and kids with wings and superhuman abilities. While most of the story is told from Max’s point of view, when the flock is separated, readers get a third-person perspective from a member of each group. The changing points of view allow readers to keep up to date with everyone. Occasionally, Max also addresses the reader using the second person, adding a memoir-like tone to the novel. Max’s voice is very distinct because of her sarcastic and sassy tone. Readers can easily fall in love with everyone in the flock and look forward to joining them in discovering who really they are.

Some of the more prevalent themes are freedom, family, and fate. The flock hasn’t talked about their experiences and, as Max explains, they prefer to “forget when we were at the mercy of sadistic jerks in a place that’s a total nightmare and ought to be firebombed.” Because of their experiences, the flock values their freedom. In addition, the flock’s relationships show that family is not always formed through blood and that having a strong base of friends can be all the support one needs. Fate also becomes a part of this story as Jeb says, “Max, everything you’ve done, everything you are, everything you can be, is tied into your destiny.” According to Jeb, Max’s fate is predetermined, which makes her question her own autonomy and freedom.

Maximum Ride: The Angel Experiment is a strong start to this sci-fi series. The chapters are short, the pacing is fast, and the language is clear and concise. These aspects of the novel match well with a large amount of action and the plot, which can be confusing. Max gives readers a warning in the beginning, saying, “If you dare to read this story, you become part of the Experiment. I know that sounds a little mysterious—but it’s all I can say right now.” So, if you decide to read this book, be prepared to become part of the flock.

Other books by James Patterson

“Sometimes it felt as if we would never be free, be safe. Never, ever, as long as we lived. Which might not be that much longer, anyway,” Max. –Maximum Ride: The Angel Experiment