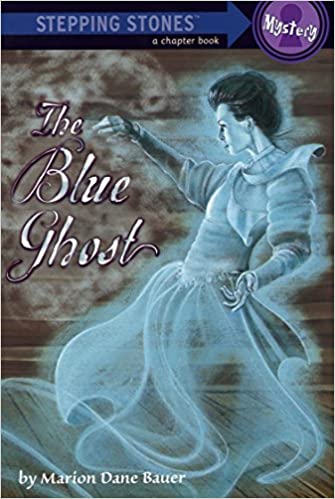 Other books by Marion Dane Bauer

“For me, dear Liz, this house is about connections. Connections with all the people who came before us. My grandmother used to tell me stories about them. It’s like they are still here,” Gran. –The Blue Ghost

Liz is staying with her grandmother in her old house in the woods of northern Minnesota when one night a noise awakens her. It is someone calling her name, calling for Elizabeth. Liz opens her eyes. There is a blue ghost in her room! What does the ghost want from her?

The Blue Ghost pulls readers into the story right from the start. Even though the story focuses on a ghost, the ghost tugs at readers’ curiosity instead of scaring them. When the ghost beckons to Liz, she follows the ghost into the past where Liz meets one of her relatives, a young girl named Elizabeth. When Elizabeth mistakes Liz for a guardian angel, Liz doesn’t correct her, because trying to explain the truth would be confusing. Instead, guided by the ghost, Liz is able to help Elizabeth care for her baby brother who is sick with the croup. Once the baby is out of danger, Liz returns to the present.

The Blue Ghost isn’t just a ghost story; it is also a story about family connections. Through Gran’s stories, Liz learns about the history of her family. This knowledge helps Liz when she goes back in time. However, Liz is surprised to discover that Elizabeth does not know how to read. While Elizabeth is embarrassed by her inability to read, Liz encourages her by saying, “[You] could learn very quickly.” Once Liz returns to the present, she discovers that Elizabeth not only learned how to read, but she also became a doctor!

Readers will enjoy the mystery surrounding the blue ghost as well as the sweet relationship between Liz and Gran. Through Gran, Liz learns about her ancestors who built the house and the importance of family connections. While the two have some fun moments, the story’s tone has moments of sadness. However, sadness is not portrayed in a negative light, but as a natural part of life. Gran teaches Liz that “tears are probably the best cure for a touch of sadness. Or the second best, anyway.” According to Gran, the best way to get over sadness is “sharing your bit of sadness” with someone you love.

Readers who are ready for chapter books will enjoy The Blue Ghost’s format because of the short chapters, large font, and illustrations. This book is part of the Stepping Stones Series that is specifically written for beginning readers. The series allows readers to explore different genres such as history, humor, mysteries, and classics.

The Blue Ghost is an engaging story that gives readers a peek into the past and shows that it is never too late to learn. The story focuses on Liz, who is a curious and likable protagonist who wants to learn about her family’s past. While Gran takes a secondary role, the relationship between Gran and Liz is endearing and readers will enjoy seeing how Liz is able to help Gran. Unlike many ghost stories, Liz doesn’t keep her experience a secret. Instead, the book ends with Liz sitting down to tell her Gran all about her ghost. The Blue Ghost is a surprising ghost story because there is no scare factor. Instead, readers will be eager to see how Liz’s willingness to follow the blue ghost allows her to help in an important way.

Other books by Marion Dane Bauer

“For me, dear Liz, this house is about connections. Connections with all the people who came before us. My grandmother used to tell me stories about them. It’s like they are still here,” Gran. –The Blue Ghost