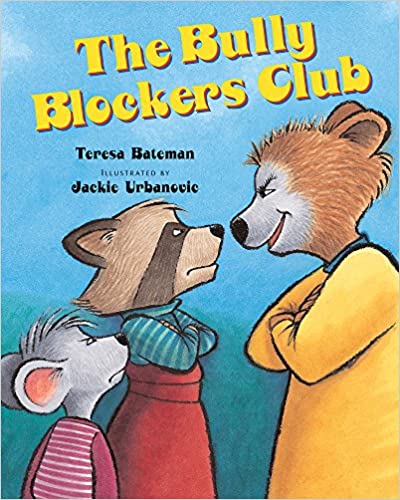 “Everyone at our school is supposed to feel safe. If you don’t feel safe, you need to tell an adult. That’s not tattling,” the teacher. –The Bully Blockers Club

Lotty Raccoon is excited. This year she has a new teacher, new backpack, and new shoes. But her enthusiasm quickly wanes when Grant Grizzly begins bullying her. At the advice of her brother and sister, Lotty tries ignoring Grant and then tries to make a joke of it all, but neither approach works. When her parents hear about Grant, Lotty’s dad talks to the teacher. Although the teacher speaks to Grant and Lotty, now Grant just bullies her when no adult is around.

After talking to her family again, Lotty comes up with an idea. She notices other kids are being bullied by Grant too. She gathers everyone together and they form a club—The Bully Blockers Club. Now when Grant tries to bully someone, the other kids speak up. That gets an adult’s attention, and Grant stops his bullying!

The Bully Blockers Club will help readers understand what to do when someone is being bullied. Besides giving different ways to try to deal with a bully, the book also covers the topic of being a tattletale. The story reinforces the importance of telling an adult when you do not feel safe. Another positive aspect of the story is that Lotty and the other students are never mean to Grant, even when he is being a bully. The conclusion implies that Grant is going to stop his bullying ways, which may be a bit unrealistic.

The book’s cartoonish pictures will appeal to readers and show the different ways Grant is bullying others. When Grant is being mean, the different students clearly show their anger and fear. Even though The Bully Blockers Club is a picture book, the story is intended to be read aloud to a child, rather than for the child to read it for the first time independently. Each page has three to 15 sentences and many of the sentences are complex. Because of the text-heavy pages, younger readers may have a difficult time sitting still until the end of the story.

The Bully Blockers Club educates readers on bullying and encourages them to talk to an adult. Several times, Lotty’s family demonstrates healthy communication skills that require listening to each other. Plus, the teacher spends class time discussing bullying. On the chalkboard, readers will find a list of what characteristics makes a bully and what characteristics make a friend. The relatable topic and the educational value of The Bully Blockers Club make the picture book an excellent read. To explore more picture books that teach about friendship, check out Shawn Loves Sharks by Curtis Manley and Angus All Aglow by Heather Smith.

“Everyone at our school is supposed to feel safe. If you don’t feel safe, you need to tell an adult. That’s not tattling,” the teacher. –The Bully Blockers Club