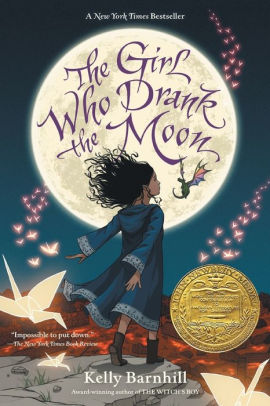 “A story can tell the truth, she knew, but a story can also lie. Stories can bend and twist and obfuscate. Controlling stories is power indeed,” Ethyne. –The Girl Who Drank the Moon

The Girl Who Drank the Moon

Every year, the people of the Protectorate leave a baby as an offering to the witch who lives in the forest, to keep the witch from terrorizing their town. But the witch, Xan, is really kind and gentle. She shares her home with a wise Swamp Monster and a Perfectly Tiny Dragon. Xan rescues the children left in the woods and delivers them to welcoming families on the other side of the forest.

One year, Xan accidentally feeds a baby with moonlight, filling the ordinary child with extraordinary magic. Xan decides she must raise this girl, who she calls Luna, as her own. As Luna’s thirteenth birthday approaches, her magic begins to emerge with unpredictable consequences, just as it’s time for Xan to go collect another child. Meanwhile, a young man is determined to free his people by killing the witch. And a volcano, dormant for centuries, rumbles within the earth. . .

The Girl Who Drank the Moon has many elements of a classical fairytale. A witch who lives in the woods, a swamp monster who recites poetry, a tiny dragon, and a curious girl filled with magic. Like a classical fairytale, the story is often dark, scary, and teaches a lesson. Despite this, readers may get bogged down in the long, repetitive descriptive passages that often use difficult vocabulary words. Between some of the chapters, there is a one-sided conversation between an anonymous speaker and another person. Because the speaker is unknown, these pages are more confusing than interesting.

The complex story uses an omniscient point of view so the reader can understand all of the characters’ thoughts. However, the story jumps to many characters—Xan, Glerk, Fyrian, Luna, the Madwoman, Sister Ignatia, Antain, Grand Elder Gherland, and Ethyne. While all the stories merge at the end, the large cast of characters and the winding plot make The Girl Who Drank the Moon best for strong readers.

Xan, a beautifully complex witch, shows love through every action. When she collects the abandoned babies and finds them new homes, she truly believes that she is doing what is right. Later she realizes that “I was wrong not to be curious. I was so wrong not to wonder.” Xan’s compassion allows her to understand others’ pain, and her love gives her the strength to fight for others.

The story deals with the difficult topics of death, grief, and political corruption. But beauty is woven into each page as the characters realize that family is not always determined by one’s birth, but by love. Luna’s family—Xan, the swamp monster, and the tiny dragon—is formed by love, loyalty, and the willingness to sacrifice for each other.

Even though The Girl Who Drank the Moon won the Newbery Award, the story may hold more appeal to adults than to middle-grade and teen readers. While the story has some interesting elements, the length of the story, the long descriptive passages, and the slow world-building make the story difficult to complete. Readers looking for a story about a witch that steals children may want to skip The Girl Who Drank the Moon and read Nightbooks by J.A. White instead.

“A story can tell the truth, she knew, but a story can also lie. Stories can bend and twist and obfuscate. Controlling stories is power indeed,” Ethyne. –The Girl Who Drank the Moon