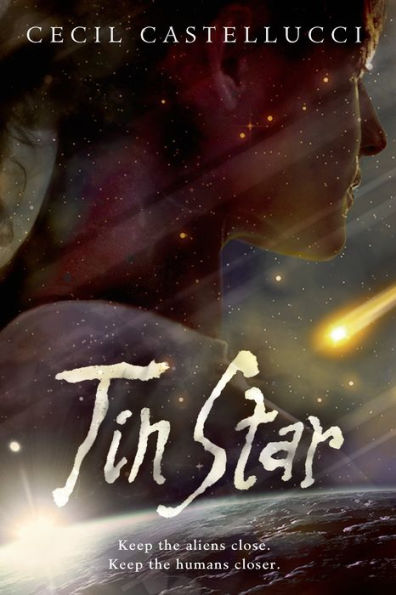 Other books by Cecil Castellucci

“But the dead, they have ghosts. Ghosts are very useful for haunting. Never forget the dead, Tula. They have their function. They sometimes speak at the most useful or inopportune times,” Heckleck.   —Tin Star

Left for dead at a space station far from Earth, Tula is focused on getting revenge. Revenge for the beating Brother Blue gave her. Revenge for the death of her family and the other members of the group who had hoped to colonize a planet. In order to get revenge, Tula must first learn to survive in the underguts of the space station.

Luckily, an alien named Heckleck befriends Tula. Heckleck teaches her how to trade with the natives and gives her a desperately needed friend. Just when life on the space station began to seem normal, three humans crash land on the station, and Tula wants to use this opportunity to get her revenge. She soon discovers that taking down Brother Blue may mean the end of Earth. Should she take this opportunity to destroy her greatest enemy or protect the planet that she loves?

Tula and Heckleck are loveable characters that show that friendships can grow despite physical differences. Even though Tula trades with questionable people, she has an honorable code of ethics that she lives by. This code allows other characters to trust and respect her.

Because the story is written from Tula’s point of view, the reader has the opportunity to feel her pain, understand her desire for revenge, as well as see her desire to do what is right. The author uses vivid description to bring Tula to life and make the reader care for her.

Although the book has some violence and sexual content, these scenes are not described in detail, and they are in the book to advance the plot, not merely to add to the entertainment factor of the book.

Overall Tin Star is an entertaining book that gives readers a glimpse into a believable space world, where different species learn to care for each other despite the harshness of life.

Other books by Cecil Castellucci

“But the dead, they have ghosts. Ghosts are very useful for haunting. Never forget the dead, Tula. They have their function. They sometimes speak at the most useful or inopportune times,” Heckleck.   —Tin Star