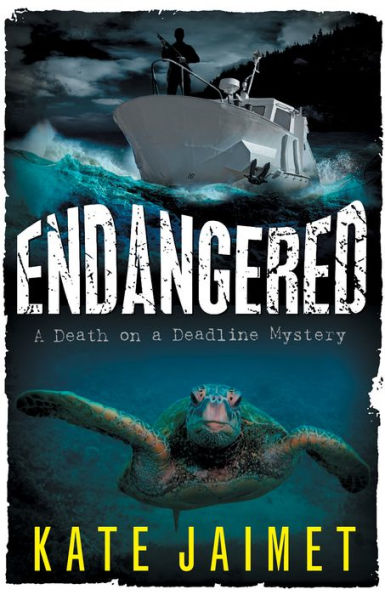 Other books by Kate Jaimet

Endangered: A Death on a Deadline Mystery

Hayley isn’t a typical teenage girl. Rather than caring about prom or worrying about not getting her high school diploma, she spends her time working for her father’s newspaper.

While listening to a police scanner, she gets her first big scoop. Her hope is to discover whose blood is splattered all over a remote cabin. But instead of looking for clues, Hayley’s father forces her to participate in a research project to earn credits she needs to graduate high school.

Instead of investigating a possible murder, Hayley finds herself stuck on a boat doing research with only Ms. Cameron, a biology teacher, and Ernest, a social outcast, for company. Hayley and her group find the rare turtle they’re hunting for, but with it they find people illegally hunting it. When Hayley and Ernest try to protect the turtle, they find their lives are in danger. Now Hayley has two mysteries to deal with-and twice the danger.

Endangered: A Death on a Deadline Mystery is an enjoyable book. While the ending is no surprise, the story is engaging and interesting. Even though the bad guy is predictable, the ending is still satisfying and will make the reader smile.

Hayley is a loveable, realistic character the reader can bond with. Hayley has abandonment issues because her mother left her as a baby. She doesn’t do the “dating scene” because she’s not sure how to handle guys. She doesn’t have a normal family life. But when it comes to reporting, she is assertive and sure of herself.

Between the mystery, the hunt for an elusive turtle, and Hayley’s personal story, the book has a lot to love. Even though the story revolves around a possible death, the violence is not detailed or graphic. However, there are many references to drugs and alcohol that may be inappropriate for younger readers.

Other books by Kate Jaimet