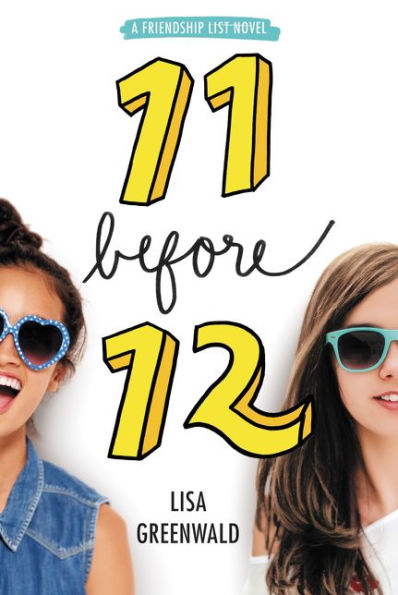 “We have this once-in-a-lifetime opportunity to make this first impression at middle school. We need to figure out who we want to be, what impact we want to make on the world,” Kaylan. –11 before 12

Kaylan and her BFF, Arianna, have a foolproof plan for surviving middle school: 1. Make a list of eleven things they need to do to become amazing before they turn twelve and 2. Show off their brand-new selves with the best joint birthday party in the history of West Brookside Middle School.

But between cafeteria drama, crushes gone wrong, and some major misunderstandings, Kaylan and Ari lose sight of the one thing they forgot to put on their list: “Keep our friendship strong.” As their party grows nearer, they’re both left listing the ways their friendship is falling apart.

Told from Kaylan’s point of view, 11 before 12 is a one-sided story told by a self-centered, manipulative preteen. Unfortunately, Kaylan is hard to sympathize with for a variety of reasons. She is only nice to her mother when she wants something. Both Kaylan and her brother yell at each other and their mother. Kaylan wants to be treated like a mature grownup, but she acts like a brat and doesn’t take anyone else’s feelings into consideration—not even her best friend’s.

For the majority of the book, Kaylan and her BFF, Arianna, aren’t talking to each other because of a fight. However, they are both “loyal to the list” and continue working on checking everything off the list, including a first kiss. The story has plenty of awkward boy moments and silly conversations that will appeal to preteens. One positive aspect of the story is that Kaylan learns that “there’s really no purpose in dwelling on the past or mistakes or regrets. The only thing we can do is try and learn something and then move on.”

In the end, Kaylan and Arianna repair their relationship. However, the happy ending feels unrealistic and, unfortunately, the reader may wonder why Arianna would want to be friends with Kaylan. While the topics of first kisses and new friends will appeal to tweens, Kaylan’s selfish behavior dominates the story. Pugs and Kisses by J.J. Howard has similar tween-friendly themes with a more relatable main character.

“We have this once-in-a-lifetime opportunity to make this first impression at middle school. We need to figure out who we want to be, what impact we want to make on the world,” Kaylan. –11 before 12