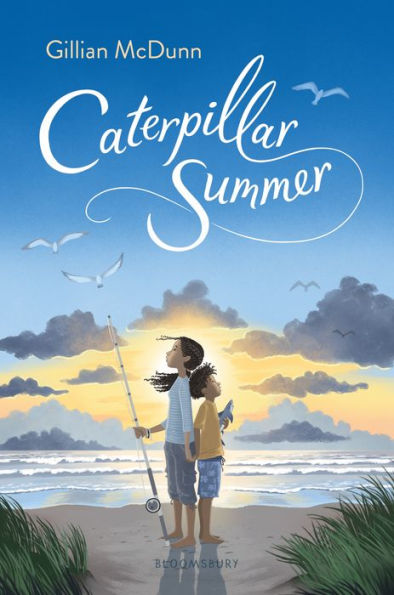 “Holding a family together is a quiet kind of work. Sometimes that work doesn’t get noticed much,” Lily. –Caterpillar Summer

Eleven-year-old Cat is used to taking care of her younger brother, Chicken. She knows that he isn’t like other seven-year-olds. Cat understands that Chicken gets upset easily; He doesn’t like loud noises, tags in his shirt, or being called Henry. Sometimes he acts out, and Cat has become an expert at calming him.

Cat is looking forward to spending three weeks in Atlanta. Unexpectedly their plans change, and Cat and Chicken go to stay with their grandparent that they have never met. She isn’t excited about spending time with her mother’s estranged parents, Lily and Malcon. She doesn’t think they can take care of Chicken as well as she can. But as she adjusts to her grandparents and life on an island, Cat realizes it has been a long time since she has been able to be a kid. The more that she learns about her grandparents, the more she wonders why her grandparents haven’t been a part of her life.

Beautifully written, Caterpillar Summer is written from Cat’s point of view and does an excellent job putting Cat’s emotions into language that younger readers can understand. Her mother works hard to provide for the family, and her father has died, which leaves Cat in charge of her brother. Cat is a remarkably relatable character, who clearly loves her brother, but gets frustrated that she must always watch him. As Cat learns to trust her grandparents to care for Chicken, she is given more freedom and becomes aware of her own needs. Because of her newfound independence, she learns the importance of advocating for herself.

Readers will also love Chicken, who loves sharks and who wants to do things his way. Cat soon learns that her overprotective nature has not allowed Chicken to solve his own problems. And although Chicken needs to be watched over, he also needs to be able to interact with others and solve conflicts on his own. In addition to the lovable characters, the story also has cute black and white illustrations of a chicken and a caterpillar that connect to the characters and help the reader understand the conflict between the two siblings.

The story focuses on family relationships and the misunderstandings that can lead to lasting hurt. The story also hints at the difficulties biracial children encounter. The story is realistic and shows the complicated nature of family relationships. Themes of family love, forgiveness, and friendship are woven through the story. As Cat meets new people, she learns that people are “good and bad, at the same time.” Readers will come away understanding that all people have good qualities and bad qualities.

McDunn uses beautiful language and well-developed realistic characters to create an honest story about families. There are several scenes that are funny, some scenes that are heartwarming, and some that will make readers grab a tissue. Even though the story is written using easy vocabulary and simple sentences, many younger readers may not connect with the story because of the lack of action. If you are interested in action, adventure or fantasy, Caterpillar Summer will not appeal to you. Readers interested in realistic fiction will definitely find Caterpillar Summer worth reading. If you like Caterpillar Summer, you may also want to read Bob by Wendy Mass & Rebecca Stead.

“Holding a family together is a quiet kind of work. Sometimes that work doesn’t get noticed much,” Lily. –Caterpillar Summer