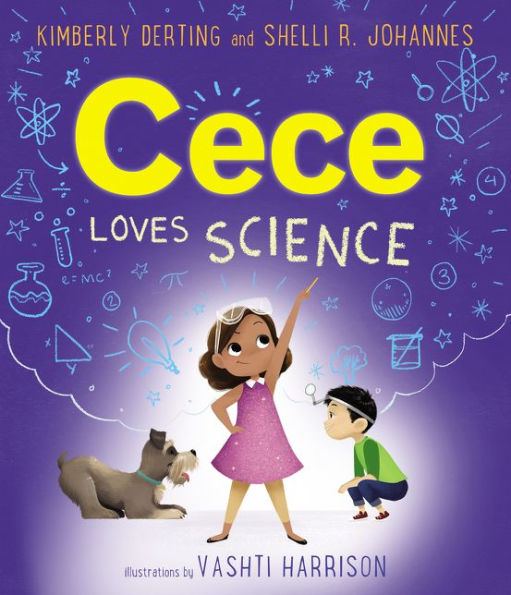 Cece loves to ask questions which is one reason she is so excited when her teacher, Ms. Curie, assigns a science project. Cece and her best friend Isaac both love zoology, so they decide to find out if dogs eat vegetables, and Cece’s dog Einstein will be the perfect test subject.

Cece and Isaac give Einstein different vegetables, but he refuses to eat them, even when they are covered with ketchup and bacon. Then Cece gets a great idea! Einstein loves bananas. Would Einstein eat vegetables if she made a vegetable and banana smoothie?

Both Cece’s parents and teacher encourage Cece to ask questions and then investigate to discover the answer. While in school, Ms. Curie introduces four famous scientists as well as different types of science. When Ms. Curie assigns the science project, Cece and Isaac use the scientific method which includes brainstorming, observing, and experimenting with different variables. The two friends use Ms. Curie’s Science Project Worksheet to document their experiment. The project worksheet appears throughout the story, which helps readers understand Cece and Isaac’s process.

Cece Loves Science introduces young readers to the scientific method in an easy-to-understand format. The brightly colored, full-page illustrations show Cece and Isaac in action. The illustrations highlight the characters’ facial expressions which helps readers understand their emotions. Readers will laugh at Einstein’s antics as he tries to avoid eating vegetables. The story’s text and illustrations expertly combine into an engaging format that will capture readers’ attention.

Even though Cece Loves Science is educational, the information is integrated into the story’s plot and never feels like a school lesson. While the science is kid-friendly, younger readers will need help reading the text-heavy pages because of the complex sentence structure and difficult vocabulary such as interpret, investigate and guarantee. Even though Cece Loves Science has more text than the average picture book, the fun science project will keep readers interested until the very end.

The supportive adults, diverse characters, and fun experiments make Cece Loves Science a must-read book. A two-page glossary appears at the back of the book. The glossary explains the scientists introduced in the story as well as defines science words. Cece’s curiosity is contagious, and her story will spark reader’s interest in science. After reading Cece Loves Science readers will be eager to try an experiment of their own. For more science fun, readers should check out the Ada Twist Series by Andrea Beaty, which includes both picture books and chapter books.