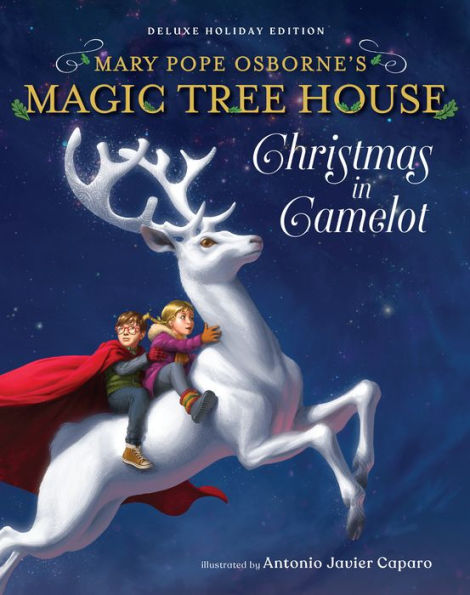 Other books by Mary Pope Osborne

Merlin “knows you both have a great desire to fight for the good. And he knows you use the gift of imagination very well. Those are two special qualities needed to succeed in any quest,” Morgan. –Christmas in Camelot

Jack and Annie are on their most exciting mission yet! It begins with a simple invitation to spend Christmas Eve in Camelot, a magical place that exists only in myth and fantasy. What Jack and Annie don’t know yet is that the invitation will send them on a quest to save Camelot itself—not just from destruction, but from being forgotten forever. Can they succeed, even though Camelot’s greatest knights have failed?

When Jack and Annie arrive at Arthur’s castle, they find the kingdom has been robbed of all joy. The Christmas Knight appears with a warning—someone must go on a quest to retrieve the Water of Memory and Imagination. Only Jack and Annie are willing to go on the quest. The Christmas Knight tells the kids a riddle, which will help them succeed. However, their journey is filled with danger and magic.

Readers will relate to Jack and Annie, who want to fight to save Camelot. Despite the characters’ young age, they work together to complete the quest. With a little imagination, a little magic, and a lot of bravery, the two kids are able to save Camelot. While the setting is in Camelot, King Arthur and his knights only appear at the very beginning and end of the story. However, readers will enjoy trying to solve the riddle and seeing how Jack and Annie persevere until the end.

Proficient readers who are ready for chapter books will enjoy Christmas in Camelot’s fast-paced plot. The large text and black and white illustrations every 2 to 7 pages make the story accessible to young readers. The large, detailed illustrations bring the characters and monsters to life. The author’s note includes the Celtic Myths that Christmas in Camelot was based on. The back of the book also includes fun Christmas craft activities that readers can enjoy.

Anyone who wants to add a little magic and mystery to the holidays will enjoy Christmas in Camelot. Even though the story is part of the Magic Tree House Series, the book can be read as a stand-alone. For more time travel and historical fiction, add the Imagination Station series by Marianne Hering & Paul McCusker to your reading list.

Other books by Mary Pope Osborne

Merlin “knows you both have a great desire to fight for the good. And he knows you use the gift of imagination very well. Those are two special qualities needed to succeed in any quest,” Morgan. –Christmas in Camelot