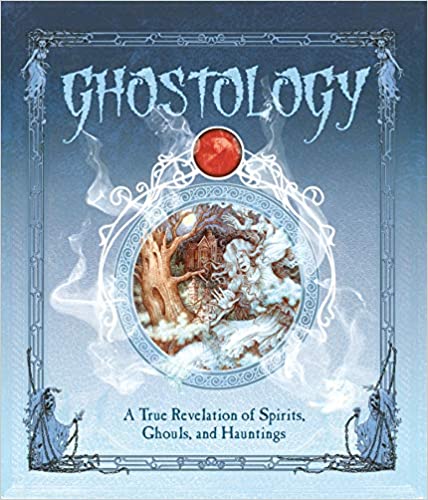 “Haunted Books: An old book may often be haunted either by a spirit within the pages or in the case of the present volume, because the author has attached an object—such as a gem—to it.” –Ghostology

by Lucinda Curtle & Dugald A. Steer

Have you been hearing strange footsteps and knocks, whispers, and rattling chains? Perhaps the early twentieth-century author of this newly discovered tome has some secrets to share. Within the book’s weathered pages you’ll hear of a headless French pirate in search of his missing noggin, a vanishing pair of young trickster twins, a ghostly woman who screams for attention, and other communications from the “fun side.”

Readers who wish to explore the mysteries of the paranormal will find some hands-on challenges to lift their spirits, along with tips on a range of spectral subjects, such as what to pack in a ghostologist’s field kit, how to distinguish different types of ghosts, the best ways to hunt them, and spotting the unfortunate fakes and frauds. Too bad the late author never got to see her guide find its way into the world! But wait—what are those strange and scratchy asides that appear in odd places throughout the book?

Ghostology is packed full of information about ghosts and explains the different types of ghosts as well as famous hauntings. Readers will be forced to interact with the book because the book is similar to a pop-up book that ask readers to open flaps that appear on some pages. Just because the book has only 30 pages doesn’t mean this will be a quick read. Each page is overloaded with information—definitions, ghostly stories, spells, information about psychics, and much more.

Each page is a visual joy to behold. Large illustrations, photographs, lists, maps, and other graphic elements are scattered over the pages, which look similar to a scrapbook. While some of the illustrations are full color and beautiful, others are black and white and show ghosts in frightening detail. However, don’t expect to believe everything you see; Ghostology takes a look at some historical “proof” of hauntings and explains why you should or shouldn’t believe the evidence. Either way, you will have to decide if the book is truth or fiction.

While Ghostology presents all the information as facts, occasionally the book has a fun, tongue-in-cheek tone. For example, toward the end of the book, in font that looks like handwriting, readers will see “Ha! HA! HA! You opened the page. At last I am Free! When darkness falls you’re sure to see . . . Lucinda (R.I.P.)” Be advised: some of the stories are creepy and some pages explain how to bring a spirit into the human world.

Readers interested in all aspects of ghosts, including learning about historical ghost hunters and how to hunt ghosts, must read Ghostology. This book will give you a host of real ghost hauntings, haunted places, and other facts that you will be eager to learn more about. For those who want to jump into the fictional world of ghosts, The House on Stone’s Throw Island by Dan Poblocki and the City of Ghosts Series by Victoria Schwab are sure to get your heart thumping.

“Haunted Books: An old book may often be haunted either by a spirit within the pages or in the case of the present volume, because the author has attached an object—such as a gem—to it.” –Ghostology