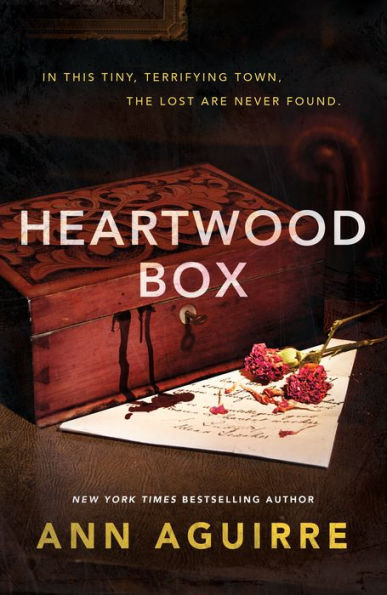 “. . . Saying goodbye constantly gets old, and it’s exhausting to make connections repeatedly. After a while, I start feeling like there was no point because nobody ever tried to hold onto me when I was leaving,” Araceli –Heartwood Box

Araceli’s parents wanted her to have a normal, American senior year, so they sent her to stay with her Great-Aunt Ottillie. Araceli is supposed to be focusing on school and getting ready for college, but she thinks that her aunt’s old Victorian home may be haunted. Araceli can feel someone watching her, and it doesn’t help that her great-aunt still leaves food out for her husband that has been missing for twenty years.

Araceli’s great-aunt isn’t the only creepy thing in town. Local businesses are plastered with missing posters. The townspeople are watchful and suspicious of each other. There are unexplained lights in the woods and a mysterious lab just beyond the city walls that no one talks about. When Araceli begins getting letters from the past, she thinks someone is playing a nasty joke on her.

When Araceli’s friend disappears, she is determined to find out what is going on. In order to solve the mystery, she must investigate the other disappearances as well as the secretive lab. But someone is willing to go to great lengths to keep their secrets hidden. Can Araceli uncover the conspiracy or will someone make her disappear?

The Heartwood Box is an immensely enjoyable, complicated story that will have readers guessing until the very end. Told from Araceli’s point of view, the creepy town comes alive. Although Araceli isn’t the most relatable character, her story is compelling. The supporting characters are not well-developed but they help move the plot along at a fast pace. For those who love character-driven stories, The Heartwood Box might disappoint.

This story is a mix of science-fiction, mystery, and historical romance. The multiple plots may leave readers confused unless they pay close attention. Not only is Araceli falling in love with a World War I soldier, but she is also trying to fit in at a new school and solve the mystery of the town’s disappearing people. The end of the story ties all of the threads together in a satisfying, if somewhat implausible, conclusion.

Aguirre also throws in the theme of colorism. Several times in the story, Araceli talks about colorism and gives examples of how dark skin people are treated differently than whites. At one point she thinks, “I wish America cared the same about Black and Brown girls, but there’s a lot to do yet.” Even though Araceli is bi-racial, this theme is not well fleshed out.

Readers looking for a unique time travel mystery will enjoy The Heartwood Box, which has several surprising twists at the end. Some of the vocabulary is difficult, but the majority of the story is written in easy to understand language. Although the ending is rushed, the book will captivate readers who enjoyed the Ruby Red series by Kerstin Gier or Passenger by Alexandra Bracken.

“. . . Saying goodbye constantly gets old, and it’s exhausting to make connections repeatedly. After a while, I start feeling like there was no point because nobody ever tried to hold onto me when I was leaving,” Araceli –Heartwood Box