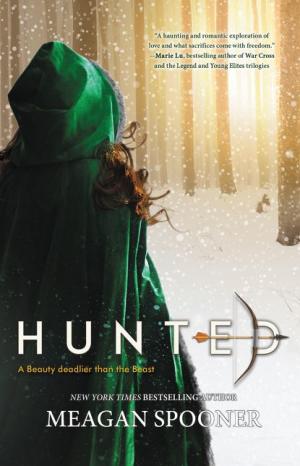 Other books by Meagan Spooner

“You may have me captive,” Yeva said. “You may control when I can leave and what I eat and how long I’m allowed to live. But you don’t own me. And don’t call me girl, like I have no name.” –Hunted

Beauty knows the Beast’s forest in her bones—and in her blood. After all, her father is the only hunter who’s ever come close to discovering its secrets.

So when her father loses his fortune and moves Yeva and her sisters out of their comfortable home among the aristocracy and back to the outskirts of town, Yeva is secretly relieved. Out in the wilderness, there’s no pressure to make idle chatter with vapid baronesses– or to submit to marrying a wealthy gentleman.

But Yeva’s father’s misfortune may have cost him his mind, and when he goes missing in the woods, Yeva sets her sights on one prey: the creature he’d been obsessively tracking just before his disappearance. The Beast.

Deaf to her sisters’ protests, Yeva hunts this strange creature back into his own territory—a cursed valley, a ruined castle, and a world of magical creatures that Yeva’s only heard about in fairy tales. A world that can bring her ruin, or salvation.

Fans of Disney’s Beauty and the Beast will love Hunted which takes place in medieval Russia and follows the original Slavic fairytale. Spooner expertly weaves parts of the original folklore while taking an in-depth look at Yeva, who often feels discontent. When Yeva’s father dies and the Beast takes her captive, Yeva’s thoughts often revolve around killing the Beast. Instead of being portrayed as perfect, Yeva’s emotions are more complicated because she feels both hatred and compassion toward the Beast. She is also admirable because, no matter how dire the situation, she never feigns comfort or lies to herself about her circumstances.

Unlike Spooner’s book Sherwood, Hunted has a much slower pace because Yeva spends much of her time alone hunting. Also, when the Beast holds Yeva prisoner in the dungeon, she is alone most of the time. Since much of the conflict comes from Yeva’s inner thoughts, there are few moments that are truly action-packed. Despite this, Hunted is an engaging story that looks at one’s deepest desires. Through Yeva’s experiences, the reader will come to understand that most people have more than one nature and they can take several paths that will lead to happiness.

Hunted will delight readers who like to explore a character’s thoughts and feelings. Even though the story focuses on Yeva, Beast’s emotions are also explored through letters that he’s written. While at the Beast’s castle, Yeva and Beast are alone, which limit’s the story’s perspective. Despite this, Hunted will transport you into a magical world full of danger. Readers who enjoy fairy tale retellings should also read the Once Upon a Con Series by Ashley Poston.

Other books by Meagan Spooner

“You may have me captive,” Yeva said. “You may control when I can leave and what I eat and how long I’m allowed to live. But you don’t own me. And don’t call me girl, like I have no name.” –Hunted