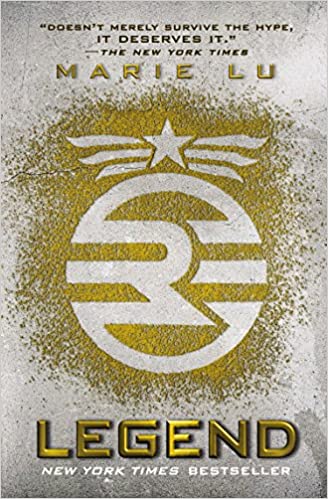 Set in the Republic, what was once the western United States, the world of Legend dives into the lives of two intelligent fifteen-year-olds, Day and June, who come from completely different backgrounds. Amid a war splitting the nation apart and a plague spreading throughout the Republic, Day and June must try to navigate the twists and turns of their own lives.

Day is a wanted criminal from the slum sector who failed his Trials – a test every ten-year-old must take that determines how useful they will be to the government. Despite hiding from the Republic’s military, Day is trying to provide for his brothers and mother. When Day finds out his younger brother Eden has been infected with the plague, he tries to steal medicine and starts to uncover things the Republic wants hidden.

June is the Republic’s star student, who comes from an upper-class military family and had a perfect score during her Trials. She attends the top university and lives with her brother, Metias, a respected military officer and June’s guardian. However, when Metias is killed, the Republic tasks a grieving June to avenge her brother’s death and find the prime suspect: Day.

Their missions lead Day and June to meet each other and they unexpectedly discover an inexplicable attraction to each other. The two uncover a truth that the Republic wants to keep hidden. Soon, Day and June realize they must work together to understand the extent the Republic will go to keep its dark secrets.

Legend is a page-turning dystopian story that stars two quick-witted and strong characters that are trying to figure out who they are in a world of conflict and deceit. Both Day’s and June’s perspectives are told from first-person point of view. To help readers avoid confusion, the text’s fonts and colors change to distinguish the chapter’s speaker. By allowing the reader to experience both sides, they can learn new information alongside the characters. Readers will become more connected with the characters and understand how they feel, making both June and Day relatable and likable.

The story includes an array of issues such as classism, morality, trust, the effects of standardized testing, and the value of family. The subjects are well-integrated into the plot without being shoved in the reader’s faces. The book clearly lays out and compares the differences between Day’s poor background and June’s wealthy upbringing, exposing the vast inequalities. The Trials are a method of standardized testing split into three parts: the physical exam, the interview, and the written exam. Children take the tests to determine if they will be helpful to the military. While both Day and June are smart in their own ways, Day is not supportive of the Republic so he is ostracized and punished.

Legend is perfect for dystopian fans who like action, mystery, and a little bit of romance. The story is dramatic, intense, and has good pacing. The plot is understandable and thought-provoking, although some of the twists are a little predictable. The theme that nothing is as it seems shines as the deception of the government and the innocence of Day is revealed. Overall, Legend is a strong start to a trilogy that uses a believable situation to encourage readers to stick to their morals, even when it makes life difficult. Readers looking for more fast-paced dystopian novels will also enjoy the Matched Trilogy by Ally Condie.