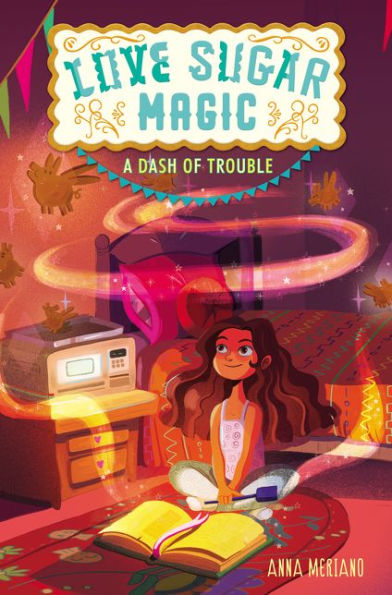 Leo wants to be able to help her family prepare for the Dia de los Muertos festival. Leo’s family owns a bakery in Rose Hill, Texas. Every year, her family spends days preparing for the big celebration. This year, when Leo is told that she is once again too young to help, she sneaks out of school and into the bakery. She soon discovers that her mother, aunt, and four older sisters have been keeping a secret from her. They’re brujas—witches of Mexican ancestry—who pour a little bit of sweet magic into everything that they bake.

Leo is determined to test her magical abilities, even when her sisters tell her to wait until she is older. When her best friend Caroline has a problem, Leo is confident that she can craft a spell to solve Caroline’s problem.

A Dash of Trouble is the first book in a series about a Mexican-American family that lives in a diverse Texan town. The fantasy includes Spanish vocabulary that is easy to understand in the context of the book. The story brings the Mexican traditions for Día de los Muertos to life.

Even though Leo doesn’t always feel appreciated by her family, her family clearly loves her and wants what is best for her. Readers will be able to relate to Leo’s desire to be treated more like an adult (even when she doesn’t act like one) as well as her desire to help her friend.

Leo spies on her family, makes promises she does not intend to keep, and practices magic against her family’s wishes. When Leo accidentally shrinks a boy from her class, his mother is frightened and calls the police. When Leo is able to reverse the spell, her family is proud of her for figuring out how to solve the problem. The boy covers for Leo, saving the family’s magical secret. Leo’s story is entertaining and filled with humor. A Dash of Trouble would lead to a good discussion on the importance of honesty.