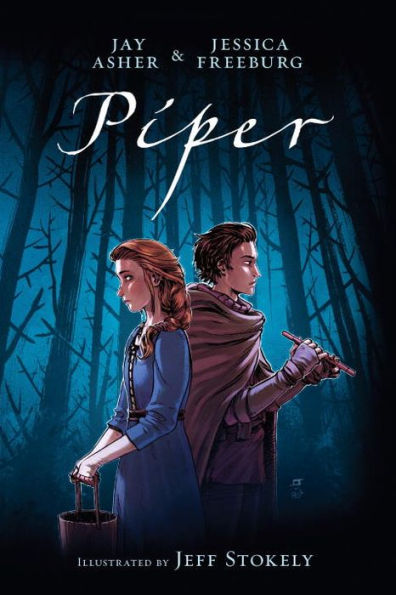 “Hamelin didn’t think that my mother—my brother—was worth breath. It is probably how they think of me. But I believe every life is worth breath,” Maggie. –Piper

Maggie lives in a small village in the middle of a dark forest. Because she is deaf, the people in her small village have shunned her. An elderly woman, Agathe, is the only person who has shown Maggie kindness. In the evening, Maggie uses her imagination to weave stories that Agathe writes down. Despite Agathe’s company, Maggie dreams of finding her fairytale love.

The village is plagued by rats, who are devouring the food and biting the people. A mysterious Piper comes to town, promising to rid the village of rats. Maggie is captivated by the Piper and thinks she has finally met her true love. However, Maggie soon discovers that the Piper has a dark side. The boy of Maggie’s dreams might just turn out to be her worst nightmare…

The graphic novel’s artwork is amazing and beautiful. Jeff Stokely uses a variety of colors that help enhance the scene’s mood. Each illustration highlights the character’s emotions, and the village is painted in vivid detail. Piper’s artwork is by far the best part of the graphic novel; each picture tells so much of the story in detail.

While the artwork is fantastic, both the characters and the plot are underdeveloped. Maggie’s backstory is confusing, and the reason the village shunned her is unclear. Maggie is deaf but has taught herself how to read lips. However, in most of the panels she isn’t looking at the person who is talking, yet can somehow understand their words. Even though the readers should empathize with Maggie, she is so underdeveloped and predictable that her story doesn’t evoke an emotional reaction.

The plot jumps around from Maggie, to the village, and then flashbacks of the past. In addition, Maggie makes up stories about the town folk. The story’s transitions are often awkward and confusing. So little information is given about the Piper that he is difficult to understand. The conclusion is quick and leaves the reader with too many questions.

As a retelling of the Pied Piper, Piper is a dark story that lacks depth. While readers will enjoy the artwork, the actual story and characters are not memorable. However, the story does touch on the theme of greed. When the villagers refuse to pay the Piper for his services, one person says, “So much evil is traced back to greed. And greed makes us choose what we believe.”

Readers who want to add a little fright to their life may want to leave Piper on the shelf. If you’re looking for a spectacularly spooky story, Nightbooks by J.A. White and City of Ghosts by Victoria Schwa would make an excellent addition to your reading list.

“Hamelin didn’t think that my mother—my brother—was worth breath. It is probably how they think of me. But I believe every life is worth breath,” Maggie. –Piper