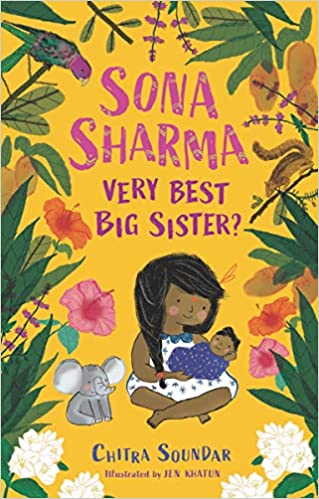 Sona Sharma’s house is full of three generations of people who often joke and sometimes argue. Relatives come over unannounced, the phone rings frequently, and friends drop by all the time. Then one day, Amma tells Sona that she is going to have a baby.

Sona isn’t so sure she wants a sibling—she has always enjoyed being an only child, and she doesn’t like the idea of sharing everything with the new baby, including Amma and Appa, Thatha and Paatti, and all her old things. But when Sona learns that there will be a naming ceremony, she is determined to find the perfect name for her new brother or sister. Because if Sona Sharma is going to be a big sister, then she wants to be the very best big sister she can be.

Sona Sharma Very Best Big Sister is best suited to read with young children who will soon become big sisters or big brothers. Much of the conflict comes from Sona’s inner struggle with not wanting to share with a new baby. The plot focuses on the baby—will it be a girl or a boy? What will the baby be named? What will happen during the baby’s naming ceremony? The singular focus will quickly bore readers who aren’t interested in an expectant birth of a baby.

For young readers who will soon become a sibling, Sona Sharma Very Best Big Sister would be an excellent conversation starter. Plus, readers will learn positive life lessons. For example, Sona learns the importance of having a tidy bedroom, helping the best you can, and allowing others to do what makes them happy. Another positive aspect of the book is that Sona’s large family treats each other kindly and have healthy communication skills. Sona’s family is from India, and readers who are not familiar with the culture will need help pronouncing names and some other words. The end of the book has a short glossary to help readers with unfamiliar words.

Sona Sharma Very Best Big Sister will help young readers understand the conflict that comes with a new sibling. If you’re looking for a book that is more accessible and shows how sisters can be wonderful friends, check out the picture book Sisters First by Jenna Bush Hager & Barbara Pierce Bush.