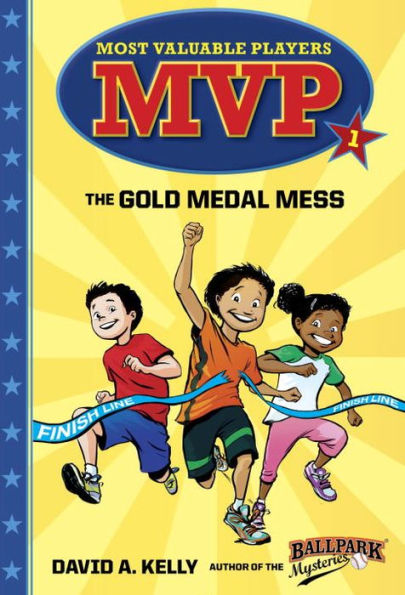 Other books by David A. Kelly

“The best thing about today wasn’t just saving the Olympics. It’s how we worked together,” Alice. –The Gold Medal Mess

by David A. Kelly

Five friends are ready for their school’s Olympics field day. There will be relay races, archery contests, and more! But not everyone wants to play fair—in fact, someone is trying to ruin the events! Can the kids in the Most Valuable Player club solve the mystery, save the Olympics, and take home the gold?

The Gold Medal Mess introduces five diverse friends—Max, Alice, Luke, Kat, and Nico. The kids work well together in order to find the culprit. None of the kids are well developed, but there is room for each character to grow in later books in the series. However, Luke is portrayed as silly and lazy. For example, when his friends ask Luke if he wants to practice archery, Luke says, “The only way I’m going to win is if they give out medals for not doing homework!”

The story’s plot is easy to understand and readers will enjoy following the clues to see if they can solve the mystery before the culprit is revealed. Large black and white illustrations break up the text and help readers understand the plot. The story’s dialogue and quick pace are engaging. However, struggling readers may have a difficult time with some of the vocabulary.

The Gold Medal Mess has a good blend of mystery and competition which makes the book appealing to a wide range of readers. The simple plot will entertain beginning readers but may be too simple for more advanced readers. Ellie Steps Up to the Plate by Callie Barkley and the Little Rhino Series by Ryan Howard & Krystle Howard will also appeal to sports fans.

Other books by David A. Kelly

“The best thing about today wasn’t just saving the Olympics. It’s how we worked together,” Alice. –The Gold Medal Mess