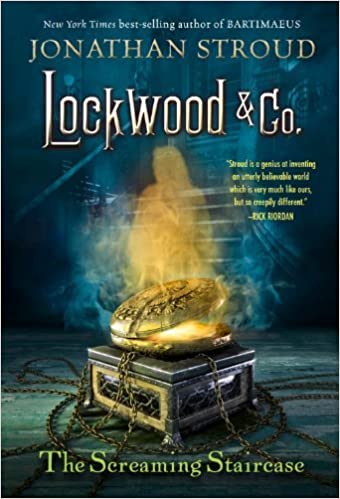 In London, ghosts haunt the living and only children have the ability to sense these otherworldly beings and remove them from our world. Lucy Carlyle and her co-workers, Anthony Lockwood and George Cubbins, are agents working for Lockwood & Co., an independent agency without adult supervisors. After an assignment goes wrong and the agency burns a client’s property down, the trio are forced to investigate the most haunted house in England: Combe Carey Hall.

The suspicious circumstances behind Combe Carey Hall might place Lockwood & Co. in even more danger than they realize, especially as they attempt to solve the mystery behind a decades-old murder. Will Lucy and her co-workers make it out of Combe Carey Hall alive? Can they help a restless spirit pass on? Or will they become just another one of the property’s victims? And what is the mysterious owner of the hall hiding?

The novel is written from Lucy’s point of view and, while she comes off as far more mature than the average teenager, her insecurities and snarky personality make her relatable without compromising her likability. The banter and trust between Lucy, Anthony, and George make each of the characters shine. Every character has strengths and weaknesses that complement each other, and this elevates their teamwork skills. In addition, the dynamic between the trio helps emphasize the importance of relying on others while also trusting in one’s own abilities. After the group escapes Combe Carey Hall alive, Lockwood even says, “I trust your talent and your judgment, and I’m proud to have you on my team.”

Stroud’s worldbuilding around the supernatural elements of this alternate London is extremely interesting and intricate. A variety of different ghosts are introduced, plus several government and private agencies that investigate the paranormal. Stroud deftly addresses how the appearance of ghosts would impact London on a wider scale. To help readers understand this complicated world, a glossary of new terms is used, which includes specific agencies and specters’ abilities.

The Screaming Staircase is an excellent introduction to more macabre horror stories, especially for tweenagers who love longer novels. The book’s grim atmosphere is more intense than most novels geared toward young children, with consistent descriptions of death and its central mystery being related to murder. However, the descriptions of violence never breach into anything too graphic, and Stroud’s light-hearted dialogue ensures that the book is never too grueling. Nevertheless, the horror elements, while toned down for a younger audience, are still present. Younger readers could easily get nightmares, so consider avoiding this book if your child is easily frightened.

A double-edged facet of the book is its lack of a true moral. The Screaming Staircase is not trying to convey any deep messages or complex ideas, but that lack of intention helps ensure the novel is a fun and down-to-earth read. The fun dynamic between Lucy and her co-workers, interesting ideas presented in a haunted London, and macabre elements make Lockwood and Co.: The Screaming Staircase an excellent introduction to YA horror.