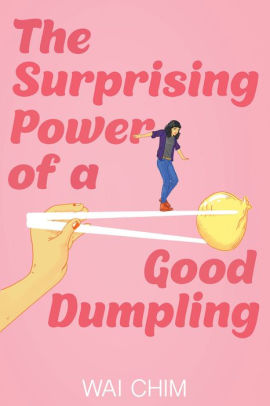 “It’s so nice and refreshing to hear people say what they mean and talk about their worries, anxieties, and feelings. Maybe one day, I’ll do the same,” Anna. -The Surprising Power of a Good Dumpling

The Surprising Power of a Good Dumpling

Anna Chiu strives to be a perfect Chinese daughter. However, Ma has been stuck in bed for longer than usual and her mental health is worsening. Anna’s Baba, who is supposed to be the parent, is spending more time at his restaurant. While the family struggles to keep Ma’s sickness a secret, Anna feels it is her responsibility to take care of her younger siblings, Michael and Lily, but she soon falls behind in her schoolwork. Will Anna realize she is taking on more than she can handle and accept that she and Ma need help?

To escape the pressures of home, Anna volunteers to help at Baba’s Chinese restaurant. There, she meets Rory, the delivery boy with a history of depression. With Rory’s help, Anna learns that treatment for her mom’s mental health is available and can help bring peace to the Chiu family. After a traumatic episode involving Ma mutilating a live fish, Ma is sent to a hospital for psychiatric care where doctors can evaluate her condition and prescribe medication. While her mother is under the doctor’s care, Anna can focus on her own mental health and she finds new ways to open up.

By the end of the novel, the family learns how to better support one another, and Anna eventually accepts that not every day can be perfect. Even Rory, who has received help for his depression and anxiety, has difficult days. The book delivers a message to those struggling with mental health issues that no one is alone and there is always someone willing to listen.

The Surprising Power of a Good Dumpling is told through Anna’s perspective and provides a realistic picture of mental health issues. Anna is a relatable character who struggles to fit in and at first, is awkward in her relationship with Rory. However, after witnessing Rory’s honest personality, Anna learns to discuss issues that are bothering her. Anna and Rory support and care for one another in a happy and healthy way. Anna is an admirable protagonist who loves her Ma and is passionate about working hard to save Baba’s restaurant. Plus, Anna shows love and encouragement to her younger siblings.

The novel demonstrates how race and struggles with identity can influence one’s mental health. As s Chinese-Australian, Anna experiences microaggressions from her peers and cultural pressures from her family. For example, the kids at Anna’s school call her “banana,” meaning she is “yellow on the outside, white on the inside. . . It’s like saying [Anna’s] a bad Chinese.” Anna soon recognizes how these pressures contribute to her anxiety. Despite this, these comments make Anna question whether she is good enough for her family.

In the end, Anna learns to take each day one at a time. She no longer bears the full responsibility of her family but recognizes the journey of her mother’s mental health recovery. Despite the stigmas against mental health issues that Anna witnesses, she accepts that her life is already normal—“It’s heartbreaking. And it’s true.” Anna no longer needs perfection as long as she is with the people she loves. The Surprising Power of a Good Dumpling explores mental health issues in addition to having a cute romance. Readers who would like to explore mental illness through another book should also read Paper Girl by Cindy R. Wilson.

“It’s so nice and refreshing to hear people say what they mean and talk about their worries, anxieties, and feelings. Maybe one day, I’ll do the same,” Anna. -The Surprising Power of a Good Dumpling