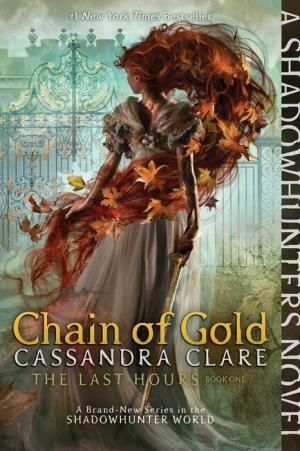 “The point of stories is not that they are objectively true, but that the soul of the story is truer than reality,” Cordelia. –Chain of Gold

Shadowhunters are angelic humans who are responsible for keeping mundanes (humans) safe from demons and other supernatural threats. For many years, London has had a quiet period, where demons have been rare. However, this changes when a new demon, a Manticore, begins killing shadowhunters. James and his sister Lucie, along with his friends, Cordelia, Matthew, Thomas, and Christopher, hatch a plan to stop the murders of their friends and families. They enlist the help of many others, not just shadowhunters, but also warlocks and ghosts, to heal those who have been injured by the Manticore. The group is determined to defeat the Manticore once and for all.

James is the son of Tessa (a warlock), and Will (a great shadowhunter). Due to the presence of demonic blood in his lineage, James often finds himself jumping between the “shadow world,” and the mortal realm. Lucie, his sister, has an unusual ability to speak to ghosts, as well as to command the dead. Cordelia is a strong, independent woman. Matthew provides comic relief. Thomas and Christopher are wholesome, kind men. Together, this band of self-named “Merry Thieves” provides an interesting cast of characters you can’t help but love.

James has been in love with Grace Blackthorn for years, seeing her every summer when on vacation, and keeping up a relationship in secret. However, when Cordelia moves to London, he finds himself drawn to her in ways that he wasn’t expecting, and is torn between the two women. When Grace breaks it off with James, he and Cordelia begin a relationship; however, it is cut short by Grace reentering James’s life using a bracelet that breeds affection. With James hopelessly in love with Grace once more, Cordelia is in an awkward situation.

In order to finally defeat the Manticore, James must journey to Hell to meet his grandfather, a demon. He and Cordelia enter the realm and kill the Manticore, while those still in the mortal realm find a cure for those who have been injured. Although it seems that the Manticore has been defeated, Belial, a Prince of Hell and James’s grandfather, has not been incapacitated to the same effect. The reader is left with a sort of cliffhanger, knowing that there is more trouble to follow.

The book is told from a third-person omniscient point of view, allowing the reader to get inside the heads of the characters, and better understand their actions and motivations. Clare creates a captivating story that’s impossible to put down, with characters who feel real enough to jump off the page. The novel emphasizes the importance of friendship and relying on those around you for help. Family is also an important theme in the novel, especially recognizing those in your family as people, rather than idols of perfection.

The cast is full of characters who are outsiders in a way, be it through sexuality, race, or gender, and the story showcases the importance of being yourself. Altogether, the novel has a fast-paced plot, characters full of depth, and important messages. All of these aspects come together to create a story that is not only entertaining but meaningful as well.

“The point of stories is not that they are objectively true, but that the soul of the story is truer than reality,” Cordelia. –Chain of Gold