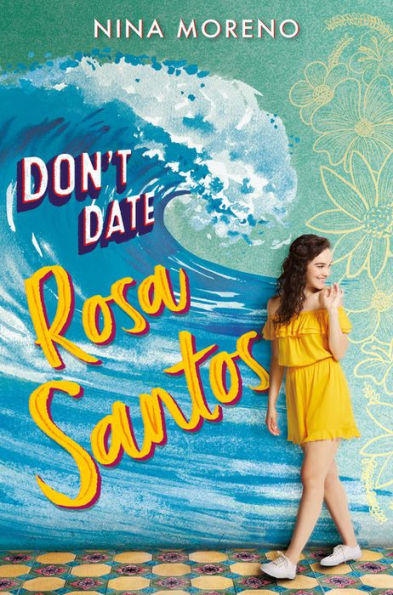 “I was home, and talking about Cuba had no place here. Mimi was never returning, my mother was always leaving, and I was a flightless bird left at her harbor, searching for answers that were buried at the bottom of a sea I could not know,” Rosa Santos. –Don’t Date Rosa Santos

Everyone in Port Coral knows that the Santos family is cursed by the sea. After all, two generations of Santos women have loved men who were lost to the ocean. Which is why, even though she’s lived in a coastal Florida town for most of her life, eighteen-year-old Rosa Santos has never even stepped foot in the ocean.

Rosa has the next few years of her life all planned out. In a few months, she’ll be graduating from high school with both her diploma and a two-year degree from the local community college. Then it’s off to a four-year university where she’s been accepted in a study abroad program at the University of Havana. She’ll finally be fulfilling her lifelong dream of traveling to Cuba, the island of her ancestors. She just hasn’t quite figured out how to tell her Grandmother. It won’t be an easy feat. After all, Mimi Santos has always refused to talk about Cuba.

But when an offer to buy the Marina threatens to destroy Port Coral, Rosa must set her plan aside and help put together a fundraiser to save her beloved hometown. It might be more difficult than expected, considering she’ll be working side by side with the distressingly cute Alex Aquino. Her growing crush wouldn’t be that bad, except Alex happens to be the one thing that ought to be strictly off limits to a Santos girl like her: a boy with a boat.

Rosa struggles with some uniquely heavy issues like inherited grief and the immigrant experience of feeling like she doesn’t quite fit into her own culture. Although these issues might be difficult for some readers to fully comprehend, they are important, especially for Latinx teens looking to find themselves in a story. These tough themes are balanced out by the more “everyday” issues Rosa deals with, including the college application process and harboring a secret crush.

Although there are plenty of adorable and romantic moments, the story itself goes beyond the typical rom com. Moreno makes a beautiful exploration into the many ways that love can manifest itself; from the years of love and loss that bind the Santos women together, to the thrill of a relationship just beginning, to the overarching love that creates a community. The characters are all well developed and both Port Coral and Cuba come alive on the page.

Readers are sure to fall in love with the complex story of the Santos women, which is equal parts heart wrenching and hopeful. Don’t Date Rosa Santos is a wonderfully diverse story about family, identity, and finding your place in the world.

“I was home, and talking about Cuba had no place here. Mimi was never returning, my mother was always leaving, and I was a flightless bird left at her harbor, searching for answers that were buried at the bottom of a sea I could not know,” Rosa Santos. –Don’t Date Rosa Santos