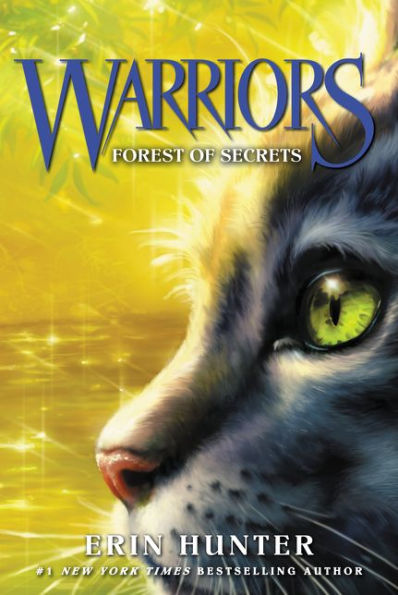 “Keep your eyes open, Fireheart. Keep your ears pricked. Keep looking behind you. Because one day I'll find you, and then you'll be crowfood,” Tigerclaw. –Forest of Secrets

Tigerclaw has become clan deputy, but Fireheart distrusts him more than ever. Suspicious circumstances surround the death of the former deputy, Redtail. Fireheart wonders if Redtail was really killed by an opposing clan or if Tigerclaw somehow killed him. Fireheart’s quest to investigate Redtail’s death might teach him that some secrets are better hidden.

Meanwhile, a food scarcity causes stress to build between the clans. With tensions high between all four clans, allegiance begins to shifts, leaving Fireheart wondering who he can trust. Even his best friend seems to be hiding secrets. Are there hidden threats that Fireheart knows nothing about? Is his own clan’s deputy working against him?

Hunter continues the beloved Warrior saga, picking up after the battle with ShadowClan and RiverClan. The clans still aren’t on friendly terms, which adds to the suspense. To help readers keep track of the changing allegiances and many characters, the book has a chart of allegiance. The third installment of the Warrior series, Forest of Secrets, must be read after the first two books in order to be understood.

Forest of Secrets contains a forbidden love, in which two cats from a different clan risk everything to sneak away from their camps to be together. The secret relationship adds excitement and suspense. Readers will also enjoy a gratifying end to the book as Tigerclaw’s true intentions are finally revealed. Readers who have read the previous books will be drawn into the drama of divided loyalties and will enjoy watching Fireheart grow as a brave leader.

“Keep your eyes open, Fireheart. Keep your ears pricked. Keep looking behind you. Because one day I'll find you, and then you'll be crowfood,” Tigerclaw. –Forest of Secrets