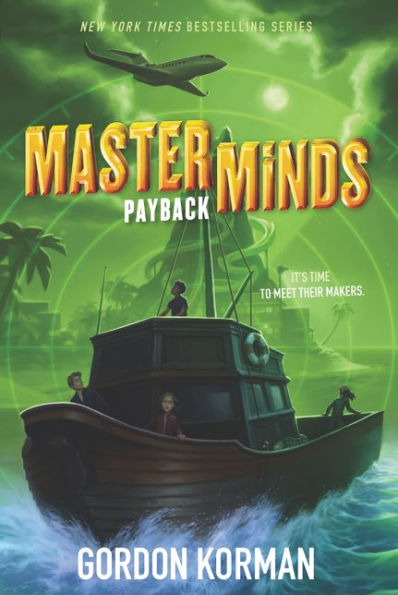 After a serious betrayal from one of their former friends, the clones of Project Osiris are on the run again. Now separated into pairs, Eli and Tori and Amber and Malik are fighting to survive in the real world.

Amber and Malik track down the one person they think can help them prove the existence of Project Osiris, the notorious mob boss Gus Alabaster, also known as Malik’s DNA donor. But as Malik gets pulled into the criminal world—tantalized by hints of a real family—his actions put him and Amber in greater danger.

Eli and Tori get sucked into even bigger conspiracies as they hunt down Project Osiris’s most closely guarded secrets—including the question of who Eli’s DNA comes from? With a surprising new ally and another cross-country adventure, the four will have to work together to overcome the worst parts of themselves if they are going to end Project Osiris once and for all.

Payback, the fast-paced final installment in the Mastermind Series, shows what happened to all the other Osiris clones. The beginning of the book focuses on Malik, Tori, Amber, and Eli. Malik and Amber spend time with the criminal that Malik was cloned from; until Malik finally realizes that he is not the same as the criminal who shares his DNA. On the other hand, Eli makes a surprising discovery about the person he was cloned from.

While Payback has several surprising twists, some of the plot is redundant and the events don’t shed much light on the characters. Despite this, there is enough action and suspense to keep readers interested. However, because of the backstory, readers must read the Mastermind books in order in order to enjoy Payback.

The books’ narrative repeatedly talks about how the characters were excellent at criminal behavior because their DNA came from criminal masterminds. However, the conclusion contradicts these statements by claiming that the characters’ DNA does not determine their behavior. The conclusion also leaves many questions unanswered, which may frustrate readers. Instead of having a solid conclusion, the book ends without tying up all of the plot threads.

One surprising aspect of the Masterminds Series is the unexpected pockets of humor. Even though the characters are often in danger and running from their enemies, readers will find themselves laughing out loud because of the characters’ interactions. While the series has some flaws, the unique premise, the interesting characters, and the plot twists will keep readers turning the pages. Readers looking for another fast-paced adventure should add the Wizard for Hire Series by Obert Skye to their reading list.