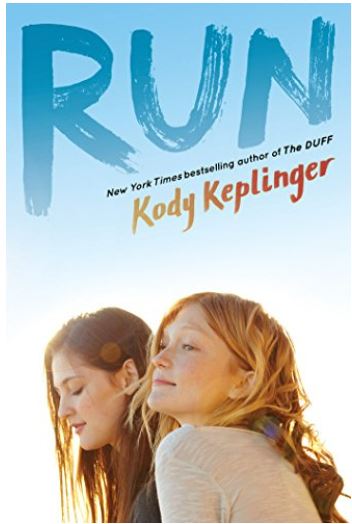 “Be careful. It ain’t easy to love a Dickinson,” Colt. –Run

Bo Dickinson is a girl with a wild reputation, a deadbeat dad, and a mama who’s not exactly sober most of the time. Everyone in town knows the Dickinsons are a bad lot, but Bo doesn’t care what anyone thinks.

Agnus Atwood has never gone on a date, never even stayed out past ten, and never broken any of her parents’ overbearing rules. These rules are meant to protect their legally blind daughter, though protect her from what, Agnus isn’t quite sure.

Despite everything, Bo and Agnus become best friends. It’s the sort of friendship that runs truer and deeper than anything. So, when Bo shows up in the middle of the night, with police sirens wailing in the distance, desperate to get out of town, Agnus doesn’t hesitate to take off with her. But running away and not getting caught will require stealing a car, tracking down Bo’s dad, staying ahead of the authorities and – worst of all – confronting some ugly secrets.

Bo and Agnus are unlikely friends mostly because of Bo’s bad reputation. Everyone in town believes that Bo is white trash, who drinks too much and sleeps around with anyone and everyone. Even though Bo has done nothing to earn this reputation, she does nothing to dispel it either. Unlike Bo, Agnus is resigned to live a boring life in her hometown that she will never leave. Because of her disability, her parents are overprotective, but Agnus never talks to them about how she feels trapped. The two girls form a strong bond, and readers will enjoy seeing how their friendship progresses and changes them.

Run alternates between Bo and Agnus’s points of view; it also jumps from the past to the present. Bo and Agnus’s voice are very similar, so readers will need to pay attention to the name that appears at the beginning of every chapter. Despite this, the story’s plot is easy to follow. However, while Bo and Agnus are interesting characters, they are not necessarily relatable.

Unfortunately, the girl’s relationship doesn’t necessarily make either one of them better people. Once Agnus begins spending time with Bo, she begins lying to her parents, using profanity, and even drinking beer a couple of times. Although Agnus’s parents come to like Bo, when Bo’s mother is thrown into jail, Agnus’s parents do nothing to help her.

Run will appeal to teenagers because it deals with many teenage issues such as false rumors, gossiping, parent disapproval and trying to find your way in life. However, at times the frequent profanity is distracting and Bo’s unwillingness to correct false accusations is unbelievable. Despite this, Run is an entertaining story that teenagers will enjoy.

“Be careful. It ain’t easy to love a Dickinson,” Colt. –Run