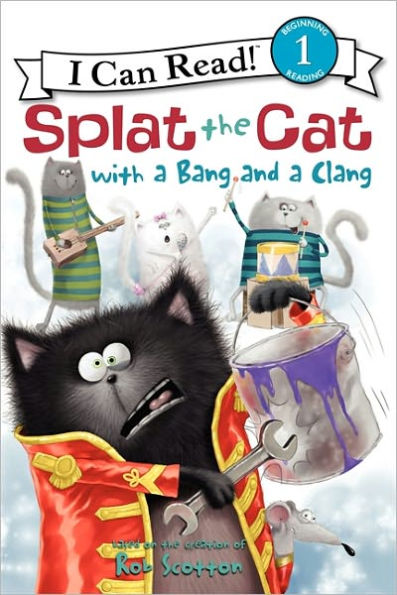 Other books by Rob Scotton

Splat the Cat with a Bang and a Clang

I Can Read Book 1 Series

Splat’s friends decide to start a band called the Cat Gang and each person has a part. Spike plays the drums. Plank plucks a guitar. Kitten sings. But Splat doesn’t know how to play an instrument. He doesn’t know how to sing. But his friends encourage him to “use his head” and find out how he can be a part of the band. Even though Slat has a hard figuring out how he can contribute to the band, his friends keep reassuring him. In the end, Splat finds a unique instrument. On the night of the show, Splat and his friends are all able to perform.

Young readers will giggle because Splat can’t dance, and they will smile because Splat’s friends still want him to be part of the band. He tries to play the drums, a horn, and a bell with disastrous results. Splat gets a little discouraged because he doesn’t make “the right sound.” Despite this, his friends continue to encourage him, and they remind him to “use his head.”

Using humor, Splat the Cat With A Bang And A Clang will encourage readers to try new things. Splat didn’t find the solution to his problem, the first time, or the second time, or the third time. But, he never gives up. Splat’s musical adventure will teach readers the importance of perseverance. Splat’s story has the same message as Winston Churchill who said, “Success is walking from failure to failure with no loss of enthusiasm.”

As Splat struggles, the bright, full-page illustrations show his emotions that range from hopelessness, disappointment, embarrassment, and happiness. Readers will love the humorous pictures and parents may want to use Splat’s facial expressions to talk about different emotions.

Other books by Rob Scotton