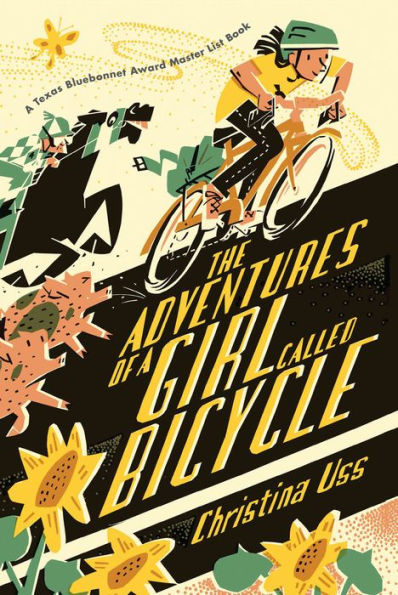 The Adventures of a Girl Called Bicycle

Twelve-year-old Bicycle loves living at the Mostly Silent Monastery in Washington, D.C., and she loves her old orange bike named Clunk. Bicycle’s guardian, Sister Wanda, tries to send Bicycle to the Friendship Factory so she can make friends her age. But Bicycle decides to make a friend on her own terms. With Clunk and her backpack, Bicycle sets off for San Francisco where her cycling idol will be attending the Blessing of the Bicycles. Bicycle is determined to befriend someone who loves biking as much as her. With racing pigs, a ghost, pies, and a little bit of luck, Bicycle learns that friends can be made anywhere and that sometimes we must make our own luck.

The Adventures of a Girl Called Bicycle is a wild tale that follows Bicycle and her journey across the United States. Bicycle’s time living at the Mostly Silent Monastery helps her navigate conflicts along her adventure, and she uses her excellent listening skills to help people with their problems. Because Bicycle shows others kindness, she is able to make friends. Bicycle receives plenty of help from strangers along the way and forms meaningful connections with people she otherwise would never have met.

There are some fantastical elements to the story. For example, on the first night of her trip, Bicycle meets a Civil War-era ghost who hitches a ride on the bike’s handlebars so he can return to Missouri, where his old friend set up a pie shop. The Adventures of a Girl Called Bicycle also discusses how luck and fortune influence people’s lives. Although the story doesn’t take any particular stance, it is clear that Bicycle helps make her own luck by being proactive and determined enough to seek out what she wants, which is friendship.

The Adventures of a Girl Called Bicycle is all told in the third person but focuses mostly on Bicycle’s thoughts and feelings. Bicycle is a great example of a kindhearted and determined protagonist. Overall, Bicycle’s story is funny and lighthearted while showing her adventures across the United States and explaining the importance of friendship and listening. The story’s adventure includes a bit of mystery and magic while also focusing on fortune and its influence on life.

Bicycle’s desire to make friends is universal, which makes it a good choice for readers of all ages. The Adventures of a Girl Called Bicycle is the best kind of quirky, upbeat story. The wit and heart of the book will certainly bring a smile to readers’ faces. Readers who want another unique story that explores the topic of luck should read Fortune Falls by Jenny Goebel.