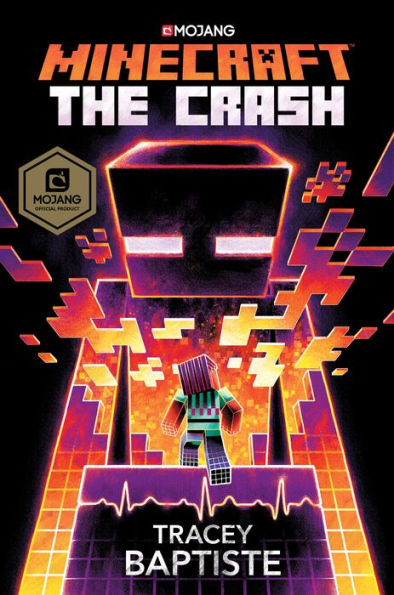 “Whatever we do, we need to stick together. We can work through anything if we just work as a team,” Anton said. —Minecraft: The Crash

Bianca doesn’t think before she acts because her best friend, Lonnie, has always been there to catch her when she falls. But when Bianca and Lonnie are in a horrific car crash, Bianca learns that thoughtless actions can lead to severe consequences for her and for others.

Bianca wakes up in the hospital with painful injuries. She is afraid to find out what has happened to Lonnie—did he survive or has Bianca lost her best friend? To avoid the painful truths of reality, Bianca jumps into the virtual reality world of Minecraft. When she meets a glitching avatar that might be Lonnie, Bianca vows to do everything she can to help Lonnie in the virtual world.

Bianca teams up with Esme and Anton, two other kids who are in the hospital. While in the Minecraft world, the kids must face dangerous mobs that are generated by their fears and insecurities. With the help of her new friends, can Bianca overcome her fears and return to reality?

Minecraft: The Crash begins with a graphic crash scene, which leaves Bianca wondering what happened to Lonnie. Bianca’s resulting fear and guilt conflict drive much of the story. Her time in the Minecraft world adds interest to those who play the game, but fans may not like that the story does not stay true to the actual Minecraft game. Instead, the author changed many of the game’s elements to fit the story’s plot. On the other hand, if someone is not familiar with the Minecraft game some events will be confusing.

Bianca, Esme, and Anton interact like typical teenagers—they argue and disagree, but they also work together (most of the time.) Esme and Anton show the importance of working together to solve a problem. They also encourage Bianca to face her issues. Esme and Anton are likeable characters who stick with Bianca through everything. However, Bianca is hard to relate to because she comes off as a self-centered person who is dishonest when it benefits her. Although Esme and Anton are doing everything they can to help her, Bianca does little to contribute to the group’s plan. Instead, she does what she wants even if it may cause harmful consequences to others. Although she feels guilty for causing the car accident, she has not learned from the event.

The length of the book, the complexity of the plot, and some difficult vocabulary combine to make Minecraft: The Crash more appropriate for middle-school readers than younger readers, as does the fact that the story deals with the difficult topic of death. Although Bianca recognizes that she is to blame for Lonnie’s death, the ending of the story does not acknowledge the long-term ramifications of the car crash or the pain Lonnie’s death caused others. Despite these drawbacks, this book will keep readers who want to jump into the Minecraft world entertained with battle after battle.

“Whatever we do, we need to stick together. We can work through anything if we just work as a team,” Anton said. —Minecraft: The Crash