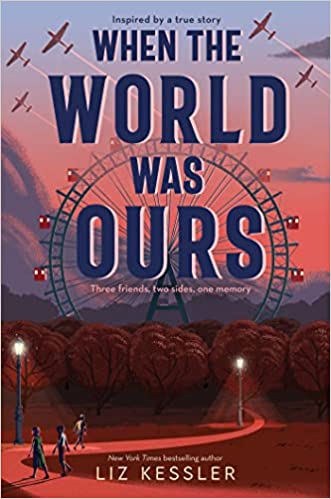 “He knew what she was holding. He thought he had killed his memories when he'd destroyed his own copy. He thought his heart had hardened in stone, like his father had always wanted. But here it was again, risen from the flames like a phoenix that was telling him he could fly. Just like he believed he could all those years ago,” Max. —When the World Was Ours

Leo Grunberg spends his ninth birthday riding Vienna’s Ferris wheel with his two very best friends, Elsa and Max. While at the top, they swear they can see the whole world. They promise each other that they “will never forget the day [that they] were kings and queen of all Vienna.” To ensure that that promise will be kept, Leo’s father takes a picture and makes a copy for each of them.

But Europe is descending into war, and Max’s father is rapidly growing intolerant of his son’s two Jewish friends. As danger descends around Leo and Elsa’s families, their world falls apart. Soon, the lives of all three children take fateful turns when they move to separate countries.  With their lives taking them across Europe—to Germany, England, Prague, and Poland—will they ever find their way back to one another?

The war dramatically changes the three friends’ lives. After Leo’s father is arrested for being Jewish, Leo and his mother escape to England. On the other hand, Elsa finds a short-lived sanctuary in Prague before being forced into a ghetto and eventually to a concentration camp. All the while, her hope that better days will return gradually dissipates. Meanwhile, starved for a sense of belonging he has only ever felt with Leo and Elsa, Max throws himself into the Hitler Youth. He convinces himself that his old friends could not have been Jewish, and when his father insists that they were, he convinces himself that they were never really his friends. All the while, one vivid childhood memory continues to link the three together.

When the World Was Ours alternates among the narratives of the three children. Interestingly, each perspective takes on a different style. Max’s is presented in the third person while Elsa’s and Leo’s are in the first person. Additionally, Elsa’s is in the present tense while both boys’ are in the past tense. Though a little jarring at first, this technique ultimately allows the narratives to stand apart from one another in such a way that the reader will never lose track of which perspective they are currently reading. The characters’ heartbreaking journeys are extremely well told and will leave a lasting impact on readers.

The book’s powerful climax occurs when Max’s father secures him a position as a guard at Auschwitz, and he is tasked to kill his first Jew, assuring himself that this is “the defining moment. Everything came to this.” He is ready to prove himself as a true Nazi but is taken aback when the emaciated girl beyond his pistol utters his name in an all too familiar voice. When she smiles at him, he knows for sure she is Elsa. In these pages, it becomes terrifyingly clear how easy it can be for ordinary people to be swept up in such a horrific regime.

When The World Was Ours is a powerful must-read but it is not for the faint of heart. The story, which is based on a true story, is an unflinching look at one of the most horrific events in recent history. Readers will find it difficult to forget the characters’ trauma and will walk away with a determination to never let the atrocities of World War II happen again. Readers who would like to learn more about the Holocaust should also read Elie Wiesel’s autobiography Night.  To learn more about what happened to the Nazi’s after the war ended, grab a copy of The Nazi Hunters by Neal Bascomb.

“He knew what she was holding. He thought he had killed his memories when he'd destroyed his own copy. He thought his heart had hardened in stone, like his father had always wanted. But here it was again, risen from the flames like a phoenix that was telling him he could fly. Just like he believed he could all those years ago,” Max. —When the World Was Ours