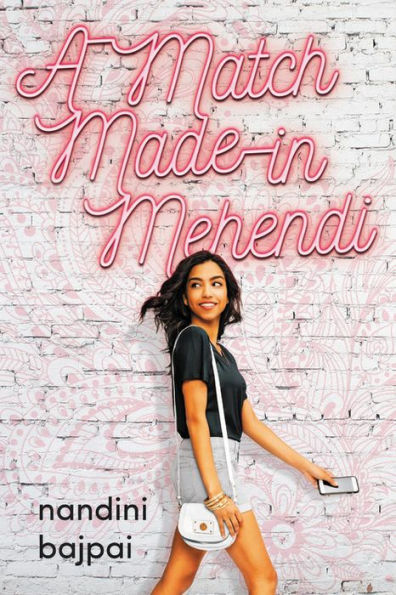 You cannot roll a boulder on your own. The only way to tackle such an obstacle is with the help of your village, your family, and your friends,” The Shagun Matchmaking Guide. –A Match Made in Mehendi

A Match Made in Mehendi

Fifteen-year-old Simran “Simi” Sangha comes from a long line of Indian vichole – matchmakers — with a rich history of helping parents find good matches for their grown children. When Simi accidentally sets up her cousin and a soon-to-be lawyer, her family is thrilled that she has the “gift.”

But Simi is an artist, and she doesn’t want anything to do with relationships, helicopter parents, and family drama. That is until she realizes this might be just the thing to improve her and her best friend Noah’s social status. Armed with her family’s ancient guide to finding love, Simi starts a matchmaking service via an app.

But when she helps connect a wallflower of a girl with the star of the boys’ soccer team, she turns the high school hierarchy topsy-turvy, making herself public enemy number one.

Simi starts her sophomore year with the intent of standing out and being her true self. As she tells her own story, the reader gets an inside scoop on her thought process. Simi’s story bounces between her home life, her love life, and her school life. Simi is surrounded by a large and loving family. She also relies on her best friend, Noah, to help her through the day-to-day struggle of school.

The story’s large cast of characters doesn’t allow the author to give each person a unique personality, and many of the characters are not well-developed. Simi’s best friend Noah is struggling with his sexual identity, but his thoughts and feelings are never expressed, which makes it hard for the reader to connect with him. Readers may also have a difficult time because Simi’s family is from India, and they often use their native language; however, there are few context clues to help the reader understand the word’s meaning.

A Match Made in Mehendi gives the reader a look into Indian culture as well as the matchmaking process. The action slows down when Noah, Simi, and her brother work on the app. The matchmaking app is an interesting twist, but Simi seems more concerned with the app’s functionality than the couples the app matches.

Like many teens, Simi is trying to find her voice and stand up for herself. Simi’s story is unique and follows several couples as they try to navigate romance. However, the character-driven story does not contain a lot of action or conflict. Although the story has several interesting facets, A Match Made in Mehendi will easily be forgotten.

You cannot roll a boulder on your own. The only way to tackle such an obstacle is with the help of your village, your family, and your friends,” The Shagun Matchmaking Guide. –A Match Made in Mehendi