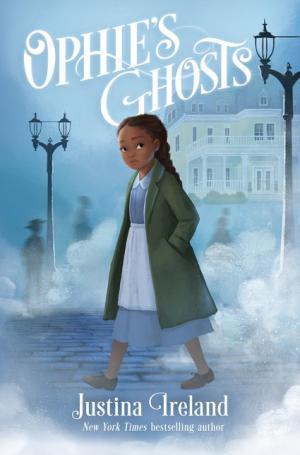 “The more Ophie thought about it, the harder it seemed to be colored, to have to think before doing anything, to wonder if the white folks looking at her meant her harm. No one came and burned someone’s house down in the middle of the night if that person was white.” –Ophie’s Ghosts

Ophelia Harrison used to live in a small house in the Georgia countryside. But that was before the night in November of 1922, and the cruel act that took her home and her father from her– which was the same night that Ophie learned she can see ghosts.

Now, Ophie and her mother are living in Pittsburgh with relatives they barely know. In the hopes of earning enough money to get their own place, Mama has gotten Ophie a job as a maid in the same old manor house where she works.

Daffodil Manor, like the wealthy Caruthers family who owns it, is haunted by memories and prejudices of the past and, as Ophie discovers, ghosts as well. It is filled with ghosts who have their own loves and hatreds and desires, ghosts who have wronged others, and ghosts who have themselves been wronged. And as Ophie forms a friendship with one spirit whose life ended suddenly and unjustly, she wonders if she might be able to help—even as she comes to realize that Daffodil Manor may hold more secrets than she bargained for.

Ophie’s Ghosts pulls the reader into the story from the very first page and will keep readers engaged until the very end. While Ophie’s tale shows the harsh realities of living in the 1920s, the story is spun using kid-friendly descriptions. However, younger readers could be disturbed by Ophie’s encounters with ghosts, many of whom died tragically. The ghosts are from every walk of life and include people of all ages and races. While Ophie interacts with many ghosts, none of the ghosts try to harm her. For Ophie, the danger comes from the living.

Readers will empathize with Ophie, who is thrown into servitude at a young age. Through Ophie’s experiences, readers will come to understand the difficulties African Americans faced during the 1920s. The story gives many examples of discrimination and explores the topic of passing as caucasian. In the end, Ophie cries because “girls who believed in happily ever afters could be murdered in attics, and because men who just wanted to have their voices heard could have their words choked off forever.”

Throughout the story, Ireland references people and events of the time. However, the text doesn’t explain the references and most readers will not understand their significance. For example, Ophie’s mother makes several comments about bootleggers, but the term is never explained. In addition, the story uses some difficult vocabulary such as irksome tomes, incandescent, tincture, fluffing, and blotto. Despite this, most readers can use context clues to understand the term.

Through Ophie’s point of view, Ophie’s Ghosts paints a vivid picture of life in the 1920s. Ophie points out the unfair circumstances that rob her of her childhood. However, despite the hardships Ophie faces, she is never bitter. Instead, she thinks about her Daddy. “Daddy had often said that when presented with two choices, a hard thing and an easy thing, the right thing was usually the more difficult one.” Because of her Daddy’s words, Ophie has the courage to listen to the ghosts and help them move on.

Readers who enjoy historical fiction, should also read Sweep: The Story of a Girl and Her Monster by Jonathan Auxie and The Player King by Avi. For readers who want to learn about history, but aren’t ready for more mature books, Survival Tails by Katrina Charman and American Horse Tales by Michelle Jabés Corpora would be good choices.

“The more Ophie thought about it, the harder it seemed to be colored, to have to think before doing anything, to wonder if the white folks looking at her meant her harm. No one came and burned someone’s house down in the middle of the night if that person was white.” –Ophie’s Ghosts